Project coordinator of NewsReader: a “Recorder of History”, which is a computer program that “reads” daily streams of news and stores exactly what happened, where and when in the world and who has been involved. The program uses the same strategy as humans by building up a story and to merge it with information stored previously. The software does not store separate events but a chain of events according to a story-line. Like humans, the program thus removes duplicate information and complements incomplete information in the news while reading. In the end, it maintains a single story-line for the events. Unlike humans, the recorder will not forget any detail, will be able to recall the complete and true story as it was told, know who told what part of the story and what sources contradicted each other.

The history recorder can be seen as a new way of indexing and retrieving information that helps decision makers to handle billions of news items in archives and millions of incoming news items every day. Current solutions simply result in long lists of potentially relevant items due to the abundance of information. It is up to the user to sift through these results: removing duplication, putting pieces together and separating correct from incorrect information. Likewise, it is often impossible to make truly well-informed decisions. The history recorder is however able to structure these results according to story lines, where it presents the information as a single and complete history. 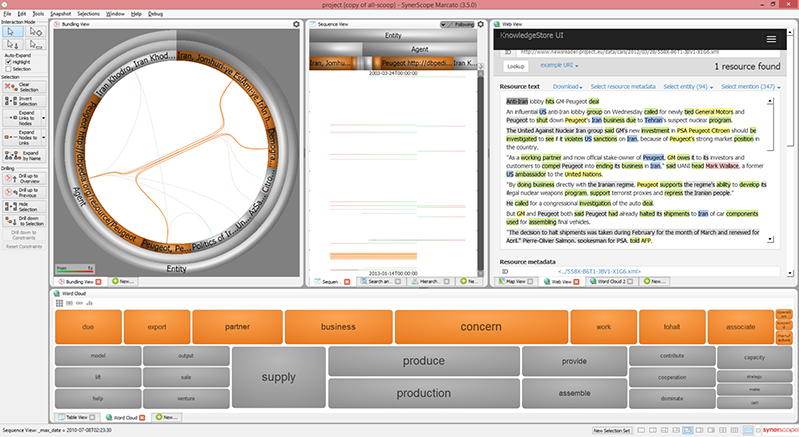 In addition to organizing news as stories, the recorder also has the capacity to abstract from individual stories and to find trends and patterns. It can for example provide a quantified overview of types of companies that are involved in take-overs, in specific periods or regions and correlate that with changes in management and profits. Since it keeps track of all the original sources of the information, the recorder can also provide insights in how the story was told. This will tell us about the different perspectives of sources on our news of today and of the past.