(A version of this post previously appeared on http://www.clariah.nl/en/new/blogs/575-team-clariah-wins-audience-award-at-hackalod-2016)

It all seemed rather funny to them, until the very moment they laid eyes upon the prison block. As ‘Team Clariah’ Marieke van Erp (VU, WP3) and Richard Zijdeman (IISG, WP4) participated in the National Library’s HackaLOD on 11-12 November. Alongside seven other teams they faced the challenge of building a cool (prototype) application using Linked Open Data made especially available for this event, by the National Library and Heritage partners. It had to be done within 24 hours… Inside a former prison… Here’s their account of the event.

We set out on Friday, somewhat dispirited as our third team mate Melvin Wevers (UU) was caught out by a cold. Upon arrival, it turned out we had two cells: one for hacking and one for sleeping (well more like for a three-hour tossing and turning). As you’d expect, the cells were not exactly cosy, but the organisers had provided goodie bags from which the contents were put to good use and even a Jaw Harp midnight concert.

With that, and our pre-set up plan to tell stories around buildings we set out to build our killer app. We found several datasets that contain information about buildings. The BAG for example contains addresses, geo-coordinates and information about how a building is used (as a shop or a gathering place) and ‘mutations’ (things that happened to the building). However, what it doesn’t contain is building names (for example Rijksmuseum or Wolvenburg), which is contained in the Rijksmonumenten dataset. But the Rijksmonumenten dataset doesn’t contain addresses, but as both contain geo-coordinates, they can be linked. Yay for Linked Data!

To tell the stories, we wanted to find some more information in the National Library’s newspaper collection. With some help from other hackers we managed to efficiently bring up news articles that mention a particular location. With some manual analysis, we for example found that for Kloveniersburgwal 73 up until 1890 there was a steady stream of ads asking for ‘decent’ kitchen maids, followed by a sudden spike in ads announcing real estate. It turns out a notary had moved in, for which another (not linked) dataset could also provide a marriage license, confirmed by a wedding ad in the newspaper. These sort of stories can give us more insight into what happened in a particular building at a given time.

We have made some steps in starting to analyse these ads automatically to detect these changes in order to automatically generate timelines for locations, but we didn’t get that done in 24 hours. However, the audience was sufficiently pleased with our idea for us to win the audience award! (Admittedly to our great surprise, as the other teams’ ideas were all really awesome as well). We’re now looking for funding to complete the prototype.

In summary, it was all great fun, not in the least due to great organisation by the National Library as well as the nice ‘bonding’ atmosphere among the teams. So, our lessons learnt:

On Wednesday 16 November, CLTL member Marieke van Erp was also interviewed with Martijn Kleppe, one of the Hackalod organisers on Radio 1 about the hackathon. You can listen back to it here (in Dutch).

CLARIAH (Common Lab Research Infrastructure for the Arts and Humanities) project granted by NWO in the National Roadmap for Large-Scale Research Facilities programme.

CLARIAH is developing a digital infrastructure that brings together large collections of data and software from different humanities disciplines. This will enable humanities researchers, from historians, literature experts and archaeologists to linguists, speech technologists and media scientists – to investigate cross-disciplinary questions, for example about culture and societal change. CLARIAH has received 12 million euros for the development of research instruments and the training of scientists. This project is vitally important for the development of the humanities in the Netherlands; a digital revolution is taking place that will drastically change how humanities research is done. The potential societal impact of this is also considerable. 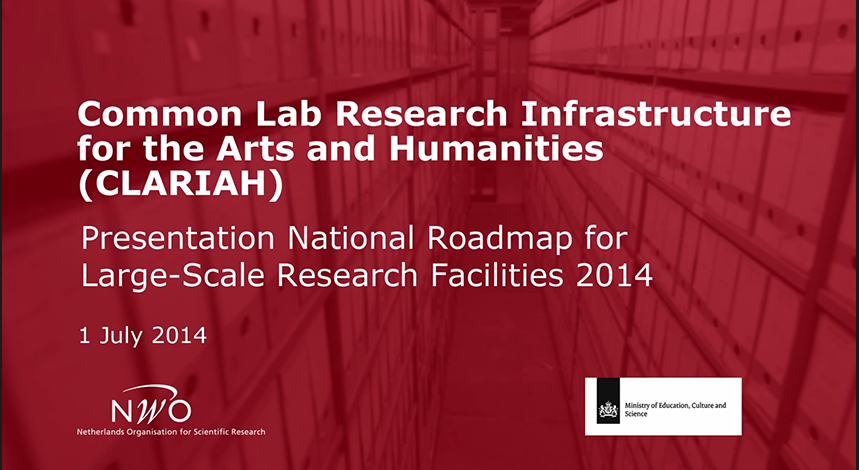 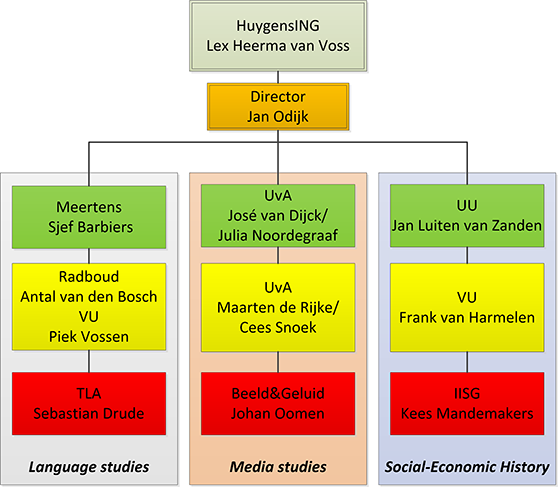